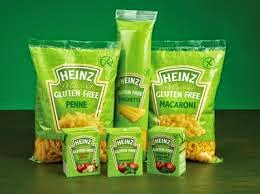 Heinz launched a new gluten-free range of pastas and sauces back in March this year. Called “Deliciously Gluten Free” range. The range includes three pasta varieties – Penne, Macaroni and Spaghetti and three pasta sauces too – Tomato Frito, Tomato & Basil and Tomato & Oregano. The pasta comes in a large bag at 500g and the sauces in a 210g pack and is made from corn, potato and lupin flour. They have no artificial colours, flavours or preservatives.
The pasta sauces follow an authentic Spanish recipe, which is fresh onion and garlic cooked in a little olive oil and then some of this infused oil is blended with tomatoes as they cook, producing a rich flavour and aroma. I tried the Tomato Frito pasta sauce and thought it was very tasty and delicious heated and stirred into pasta. It had a good kick to it that sometimes packaged and jar food doesn’t have. It tasted authentic with good flavour. I also tried the macaroni pasta, but unfortunately was really disappointed with it. I followed the cooking instructions on the pack, but the pasta came out gloopy and very starchy looking and was sticking together. It really put me off. Despite that the flavour was quite nice. Maybe it was just the macaroni and the other 2 pastas in the range may not be the same. Available in most large supermarkets.
Tweet